No Result
View All Result
Home Kings of War

Deployment is a very broad subject. I could sit on an article for months, continuously adding to it (and have been doing for weeks on this one in one form or another!), and still not have covered all of my thoughts. Instead I’m just going to list a few points that I consider in the deployment phase in Kings of War, and may write a second or third article when I come up with more points.

What makes for good deployment?

Before getting into specific tactics around deployment, it’s probably best to talk about what you’re generally trying to achieve with your deployment:

Addressing these points will give you the best deployment and with it the best chance of winning the game.

Go in with a plan, and act rather than react. That’s not to say you can’t be flexible with your plan, for example you may deploy fast movers last and place them in a position where they can take out enemy shooting early on, but don’t try to simply match your opponent unit for unit.

On the opposing side of this, if you notice your opponent is matching you drop for drop, take advantage of it with a feint. I might decide that I’m going to concentrate on one half of the board, but after seeing my opponent matching my untis I might stick a lone chaff unit such as Gargoyles on the other side of the board. My opponent will likely them deploy something heavier opposite, such as a unit of drakons or similar. Great. That means that the Drakons are tied up for several turns with the Gargoyles (I can likely pull off a pivot dance and keep them tied up on that side of the board). This means my 80 point unit is keeping their 270 point unit tied up for nearly the entire game. Net bonus for me.

I did this recently in my Clash at Kingston game against Darren Parkes. Seeing he had war engines that he likes to deploy first, I set up a unit of Gargoyles and Ba’Su’Su on the opposite side of the board to where I was intending to deploy my army. He reacted and set up two bolt throwers opposite the gargoyles. On turn 1 I flew the my units across the board to join the rest of my army and meanwhile the two bolt throwers were stuck being useless in a corner where they couldn’t see much.

Deployment begins in the listbuilding phase

One of the themes that you see me repeatedly coming back to is that of battlegroups. Organising your army into groups of units that fight together and support each other. A simple example is a couple of units of knights, paired with a light cavalry troop for chaff and an Inspiring hero of some description.

When you are devising your army list and building your battlegroups, you should be thinking about deployment at the same time. How will you deploy these units in various situations?

In my Abyssal Dwarf army list at Clash at Kingston, I used the following infantry battlegroup:

This deployed in a very specific fashion:

The Blacksouls stomp up the centre with Immortal Guard on either flank. This protects the horde from being flank charged. The Slavedriver sits behind the horde, in Inspiring range of the entire group. The Slavedriver and Dragonfire teams sit ready to hit anyone jumping over with a total of 30 Breath Attack, all with Vicious.

This is a deployment plan that I’ve considered when building the list in the first place and I’ll stick to it in the majority of my games. I may tweak some small placements, depending on terrain, my opponent and objectives but I know what the basic deployment will look like.

When you deploy, you should know how you are going to win the game.

Don’t deploy your units just trying to face off against the enemy on all fronts, choose where you’re going to engage them and choose which objectives you’re going to capture. Don’t get to the 5th or even 6th turn and suddenly panic trying to figure out which ones you can capture. You should know from the start.

If you’re facing a gunline army then start your first turn with your important units in cover or hidden altogether. If you can deploy your entire army in cover then great, but if you have to make a choice then make it your most important units that get the cover. This means that if your opponent gets first turn, that first volley will either be relatively ineffectual or, more likely, your opponent will target your low value units.

It shouldn’t be news to anyone, but terrain is a massive factor in Kings of War. It can range from movement hindering terrain (obstacles and difficult) to entirely blocking terrain. This can severely hamper your movement, especially if you don’t consider it when deploying.

Again, plan ahead for how you hope the flow of battle will progress. Where do you see your units advancing to and where will they enter combat? Is there a clear route to that location or will your units be slowed by terrain, putting them out of position when you engage?

Think about the route that your units are going to take (your lanes of advance). Is it a lane that will be hindered by terrain or is a clear lane? If you need your fast units to advance at the double in the early game so they can get on a flank then there’s no point deploying them in a lane where terrain will slow them down.

You don’t have to deploy on the deployment line

You set your units up 12” from the centre line (well, more than 12” to be precise). That means that you have to set all of your combat units up on the deployment line so they can get into battle quicker right?

Consider whether it’s better for you to set your units up a small distance behind the line. Consider the example below: 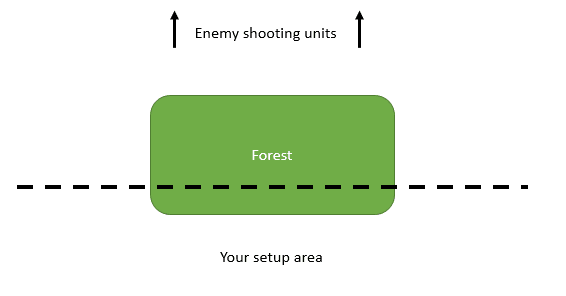 Imagine if you deployed on your deployment line slight in that forest. If your opponent gets first turn, your units will be visible and could be shot at.

Instead, if you deployed your units just a couple of inches back then they will be hidden on the first turn. If you get first turn then sure you’ve lost an inch or two of movement. If they get first turn? Shots are wasted.

Don’t feel like you have to deploy on your deployment line. If setting up slightly further back benefits you then do it.

You don’t have to deploy in parallel

The other big mistake I often see in setup is people deploying their units perfectly in line with the deployment line. Your units don’t have to be at perfect right angles to the board edges, you can start them at an angle. For example:

In this situation, you’ve deployed behind the forest. Ok, that might be fine. There might be shooting units or you might even have nowhere else to deploy your units.

Except turn 1, your movement is going to be limited. You’re going to hit that forest very quickly and not able to go any further, you’re certainly not going to be able to move At The Double.

Imagine instead that you deploy your unit at an angle: 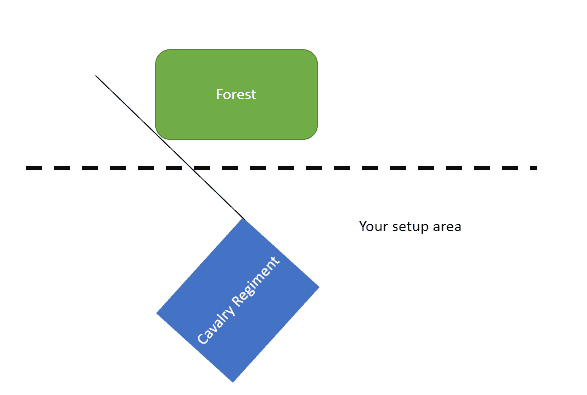 Deploying like this means that your unit can clear that forest while moving at the double. You’re still in cover for the first turn but this time you can get up the board much quicker.

This all links into the forward planning aspect of deployment. Figure out not just how you’re going to win the game, but which lanes you’re going to advance up the board in and precisely what your opening moves are going to be. Don’t get stuck into thinking that you have to deploy either at the deployment line or even parallel to it. Go in with a plan, be flexible according to terrain and objectives, but don’t adjust that plan simply to try and outsmart your opponent.

Map Packs, and why we won’t make them

I do not miss 1st edition

Tactica: The elements of chaff