Photo is completely unrelated to the article. I just thought it’d be nice to start with something pretty.

Wargaming seems to have been the ugly duckling, in many aspects, of the various intertwined nerd hobbies.

Back in the day, nerdy hobbies were considered the pursuits almost solely of, to use a stereotype, lonely basement dwellers. Over time this has changed with many interests such as comic books, anime, board gaming, RPG’s and video gaming undergoing a cultural shift. This meant updating product lines to remove harmful stereotypes and calling out toxic behaviour when seen.

This is perhaps best seen in Wil Wheaton’s “Don’t Be a Dick” speech.

None of these changes were easy of course, nor are they complete. Video games are still rife with sexism and misogyny from the community with the #gamergate crap being a massive pushback from the old guard against a changing landscape.

Nevertheless, publishers persisted. They removed chainmail bikini’s, they created more realistic female characters. While there was some controversy over the storyline in the Tomb Raider reboot, the difference in tone and attitude towards the character of Lara Croft was like night and day. Lara wasn’t wank material designed to appeal to pre-pubescent teenagers, she was a more realistic and well rounded character.

The most obvious elephant in the room that we all know I’m talking about – for starters, her tits were a more realistic size.

This all seems to have taken place over the last 10-15 years. Not entirely there, not by a long shot, but there have been massive strides aiming at inclusivity.

Wargaming, until the past couple of years seemed to be stubbornly stuck in its ways.

I will say straight up that I don’t think wargaming will ever reach perfect 50/50 parity between men and women playing. Society plays a massive role in how our personalities develop and society overwhelmingly dictates that girls like pretty pink dolls and boys like macho army men. Boys are taught not to cry and suppress their emotions, girls are taught that they’re delicate little flowers. In the grown-up world, women are the child-carers while men are the bread earners. These toxic attitudes are rife throughout society though change and improvement is coming slowly.

However, even taking this societal pressure into account, women are massively under-represented in the wargaming hobby. I’ve only ever played three games, out of the thousands of wargames that I’ve played, against women. It’s not because the subject matter is inherently unappealing to the overwhelming majority of women – similar hobbies such as RPGs and video games have seen massive increases in their female fan base. Lord of the Rings and other fantasy novels have always seen large female fan bases.

These, very similar hobbies, have reached gender parity or at least made massive improvements, so why hasn’t wargaming?

It’s not a pleasant word and I’m sure certain readers are frothing at the mouth already.

The wargaming hobby is often and has historically been hostile towards women. Often, it’s unintentional, sometimes it’s not.

We’ve all seen the comments on any online post where there’s a girl involved with wargaming. We’ve all been in a hobby store when a lass walks in and everyone goes silent. We’ve seen the rape jokes, we’ve seen female characters referred to as “inferior”, we’ve seen all the extreme behaviour from a subset of the community who do seem to outright hate women. I don’t think I need to pull up too many examples because we all have dozens that we can reel off.

Some of the attitude of wargaming being a man’s hobby comes from the very top. I don’t like the example of HG Well’s original wargaming book’s title because it is a product of its time, but in the recent past some industry leaders seemed to ignore and belittle women to the point that they seemed actively hostile.

As an example of how deep these attitudes can run, when helping to write Kings of War 2nd edition, I pushed hard to remove some of the inadvertent sexist elements in the game. At the lighter end of the scale, there was the constant referring to the player as “he”, and only using male names in examples. That was a quick fix. In the middle ground, there was an intended split for the Elf Mage – there would be an Elf Mage King which had all the offensive spells, while the Elf Mage Queen would get all the healing abilities. Because only boys could possibly attack the enemy and girls are only good at healing things and not fighting.

At the more extreme end of the scale, there was the option to upgrade a unit that was explicitly 100% female into the same unit but 100% male, giving them a strength and nerve bonus with no downsides. In Kings of War, there isn’t even differentiation in stats to account for extra strength between a malnourished peasant armed with a sword, and a well fed and trained knight with a sword. The knight doesn’t get any strength bonus over the peasant despite his vastly superior physique, yet apparently there’s enough of a difference between men and women to give men a strength bonus.

While I wish that the authors had been more receptive to this feedback and it was a quick “hey dude, this could be seen as sexist” “Damn, you’re right. I’ll fix it right now”, rather than the long drawn out process, I don’t think the authors were sexist themselves. These were just attitudes that they had developed over the years that they didn’t realise could be perceived negatively.

Often, it can be completely unintentional. Few people want to be sexist and off-putting. Point someone towards something they’re doing which is off-putting to women and they’ll be mortified that they made a mistake. That’s fine, it happens, we all learn and I’ve certainly learnt in the past.

Sometimes the hostility is just there, and they don’t care about it.

Again, I don’t want to pull up too many examples because we’ve all seen it numerous times.

Aushammer rightly called out the toxic behaviour and stated that it wouldn’t be tolerated. 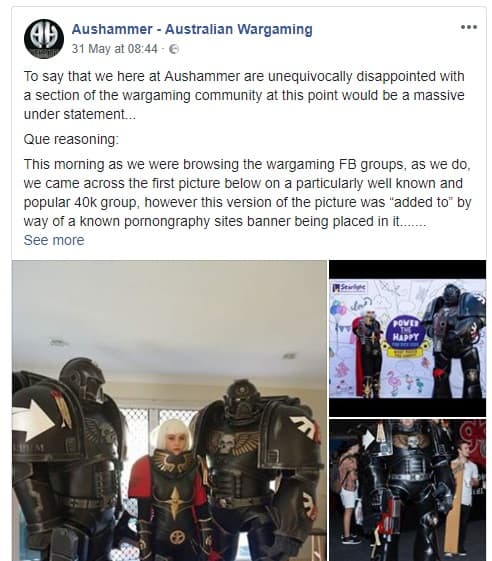 A considerable number of commenters on Aushammer’s post are not well adjusted human beings. If you see that something upsets someone – especially when it’s been targeted directly at them – basic human decency says that you reconsider continuing, perhaps apologise. Not double down on your behaviour.

This is far from an isolated case. Every single person reading this likely has multiple stories of outright hostility towards female wargamers.

What I find uplifting is that people are taking notice.

Change from the top

Games Workshop has transformed itself so much over the last five years. One of the major changes is its attitude towards women. It is openly addressing them and a few months back acknowledged its historical mistakes and pledged to change in response to messages from fans.

Games Workshop’s past attitudes are plain to see – female characters in their stories often (but not always before people pull out a bunch of examples) served as nothing more than a vehicle for the male characters. The most damning example of Grey Knights murdering and bathing in the blood of a bunch of Battle Sisters.

Despite the Imperial Guard being explicitly a mixed sex organisation with recruitment not giving two shits what’s between your legs, models were almost 100% male. Female models were few and far between. Where they existed, they were almost always objectified with very few wearing anything resembling practical clothing – not quite as explicit as the chainmail bikini but not much of an improvement either.

Well Games Workshop have been making an impact, understandably slow as it is.

The changes were at first quite subtle, with ex games designer James Hewitt saying a while back that one of their aims when updating the Blood Bowl rules was to remove any unintentional sexism, including removing gender specific pronouns in rules writing.

These changes have gathered pace with more and more women featuring in its rulebooks and publications (not without sexist comments from some fans, of course), and a stated desire to revisit their Battle Sisters line.

Most recently the new line of young-teen books feature female protagonists – non-white at that! Again, predictable sexist comments from certain fans, and now with added racism.

I fully expect we will soon see either a new Imperial Guard regiment sprue released with a 50/50 mix of female and male soldiers, or a new Cadian sprue of female soldiers to balance out the current male-only plastic sprue.

I truly think that we’re seeing the wargaming hobby grow up and follow its fellow hobbies in cultivating a more progressive and diverse fanbase. Change truly comes from the top, though activists from the bottom can convince those at the top to change tack.

We’re seeing GW acknowledge their past mistakes and actively trying to change. They are pushing forwards and I do think with their leadership, as by far the biggest player in the wargaming industry, the rest of the wargaming hobby will follow.

This does breed contempt, of course. I’m currently writing this in Word but once published on my blog, there will be a comments section. Everyone reading this knows what the comments section will be filled with;

We all know these comments are going to be there. Every one of us. They will be there on every single article written about wargaming growing up and becoming more inclusive. Every time there’s a photo of a lass playing with her Ork army the comments section will be filled with disgusting comments on how she looks. At every large wargaming event where *gasp* a girl attends, she will be subjected to some form of behaviour that is unwelcoming at best.

I realise throughout all of this that I am speaking solely of the female inclusivity. It’s the most immediately obvious form of toxicity within the community, but all of my comments refer to toxic comments to the LGBT community as well.

We’re in the middle of a revolution. Stick to what is right. Call out toxic behaviour when you see it. If someone indicates to you that something you’ve done might be considered sexist or even toxic, don’t take offence. Reflect and see if they have a point and pledge to yourself to be better in future.

Wargaming was the ugly duckling of the various nerd hobbies and we have the opportunity to improve it. Let’s take it.

This One Weird Rule Got Three RC Fired! Click to find out which one!

Tactica: The elements of chaff